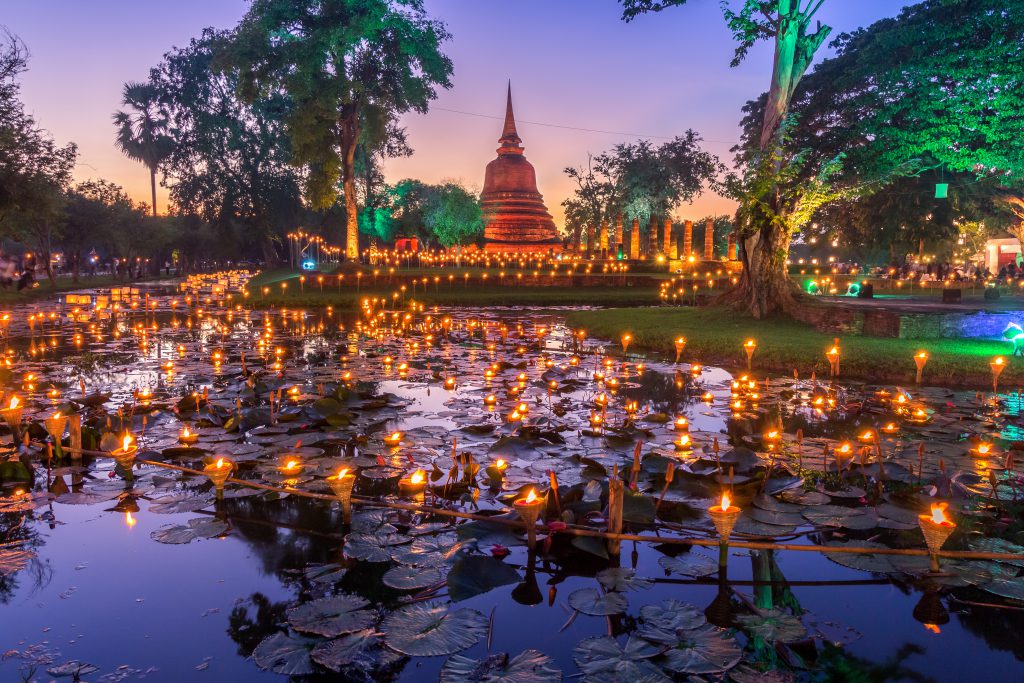 by theadmin
Happening on 11 November 2019, Loy Krathong is the second largest festival in Thailand. Known as the festival of light, it marks an occasion to celebrate hope and love, banish bad luck and welcome good fortune. Loy Krathong is commemorated all over Thailand but the main places where the festival is celebrated on an impressive... Read More

Happening on 11 November 2019, Loy Krathong is the second largest festival in Thailand. Known as the festival of light, it marks an occasion to celebrate hope and love, banish bad luck and welcome good fortune.

Loy Krathong is commemorated all over Thailand but the main places where the festival is celebrated on an impressive scale are in Sukhothai, Chiang Mai Bangkok.

Loy Krathong is a major event in Bangkok, involving ceremonies at Wat Arun, Wat Po, Wat Prayoon and Wat Kalayanamitra, and cultural events along the riverside

The Chao Phraya River is the top venue where fireworks light up the night sky while tiny candlelit vessels and brightly lit boats with lights sail up and down the waterway.

To enjoy these sights and sounds, it is best to stay at one of the riverside hotels, dine at a riverfront restaurant or venture on a river cruise.

Celebrations are a little less touristy along the downtown canals or klongs such as the Saen Saeb kong where you can float your krathong in a less crowded waterway. Commuter boat traffic is stopped on Loy Krathong night in favour of the annual festival.

The International Cultural Lantern Festival will be staged at Malin Park in Chiang Mai from 11-12 November 2019 where sky lanterns are released to coincide with the celebration of Yi Peng.

This festival which coincides with Loy Krathong is commemorated in northern Thai Lanna culture, where Chiang Mai served as the capital of the ancient Lanna Kingdom. The hot air lanterns are a spectacular sight when they fill the night sky.

Most of the activity takes place at the Ping River and at bridges, while a beautiful parade captivates onlookers along Thapae Road.

As the birthplace of Loy Krathong, the festival is celebrated for 10 days here. In addition to magical floating lights, there are folk music and dance performances known as ram wong, beauty contests, krathong-making competitions, parades, and light and sound shows at Wat Mahathat.

Nearly all the festivities are held at the Sukhothai Historical Park (the old city), a UNESCO World Heritage Site on the banks of the Yom River.

Traditions and activities that are unique to the Mon people are celebrated along the Mae Klong River. There will be an Eight Ethnics Parade showcasing the costumes and cultures of the local ethnic groups.

Krathong cups made from eco-friendly paper can be spotted along the river. Religious ceremonies paying respect to the Lord Buddha will also be held and festive activities happen along the Mae Klong River and Ratphracha Pattana Dam.

Famous for its Loi Krathong Sai or the floating of a line of made from coconut shells, a local tradition that has been passed through the ages.

Catch it by the banks of the Ping River at the foot of the Rattanakosin Song Roi Pi Bridge where a thousand lighted coconut shell cups are left adrift. A parade will also be held from the Shrine of King Taksin the Great to the main venue at the town .

Krathongs are set afloat with the outflowing tide by the beaches island-wide. Other places to celebrate the festivities include the Sapan Hin Park, Suan Luang Park, Nai Harn Lake Karon Lake. A parade starts at Sanam Chai Park in Phuket town and continues around the island ending at Saphan Hin.

theadmin
View All Posts by Author
Visit Author Website
Outdoor Destinations for a Family Vacation in Western Australia
Previous Post
As the Second Largest Festival in Thailand, Here's All You Should Know About Loy Krathong