by theadmin
Summer is here in colourful Japan and tourists are flocking to the northern island of Hokkaido for the freshest of o-sushi. In the port city of Tomakomai, sushi outlets serve up slabs of tuna, salmon, scallops and other fresh seafood over chunks of vinegared rice. Hokkaido is the heaven of fresh o-sushi is a popular perception... Read More

Summer is here in colourful Japan and tourists are flocking to the northern island of Hokkaido for the freshest of o-sushi. In the port city of Tomakomai, sushi outlets serve up slabs of tuna, salmon, scallops and other fresh seafood over chunks of vinegared rice.

Hokkaido is the heaven of fresh o-sushi is a popular perception held by many local and foreign visitors to Japan, and they are probably right. Hokkaido actually holds the record for having the biggest annual catch of ‘surf clams’ (hokki) in Japan for the past decade or so. The island is also known for Japan’s most popular comfort food which is o-sushi.

During the spring and summer months from April to September each year, millions of local and foreign visitors would flock to the northernmost island of Japan when fresh seafood is in abundance due to the favourable climate for fishing.

In the small coastal port city of Tomakomai, the locals take their sushi very seriously. Mind boggling portions and oversized slabs of fresh fish are placed on top of small parcels of vinegar seasoned rice. To the extent that one can hardly see the sushi rice hiding under these enormous pieces of juicy and succulent fresh seafood.

Tomakomai, located in Central Hokkaido and about 1 hour’s drive from the island’s capital city Sapporo, is not really a targeted tourist destination. However it offers a wide delectable range of sushi restaurants and bars which are not made up to woo tourists but actually to serve local families and workers of the city.

The ‘Clipper Kaiten Zushi’ (conveyor belt o-sushi) restaurant is a popular local favourite with proof of its 3 outlets operating in Tomakomai city. It offers medium range o-sushi for quick and casual dining with prices ranging from ¥130 to as high as ¥410 per plate of 2 pieces (e.g. ‘Otoro or Chutoro’- tuna belly o-sushi) and 2 persons dining can easily incur a total average bill of about ¥4,000-5,000 (RM150-180).

Another local o-sushi hotspot is the ‘Sushi Go Round Shunraku’ restaurant which is designed to entertain big groups, parties and special occasions. Shunraku has 3 outlets, 1 in Tomakomai and another 2 outside the city, in Eniwa and Chitose. The name Shunraku which means ‘happy seasons’ (translated literally) is meant to convey to customers that they can enjoy the diverse tastes of spring, summer, autumn and winter in the way the restaurant uses seasonal ingredients in making o-sushi and other dishes. 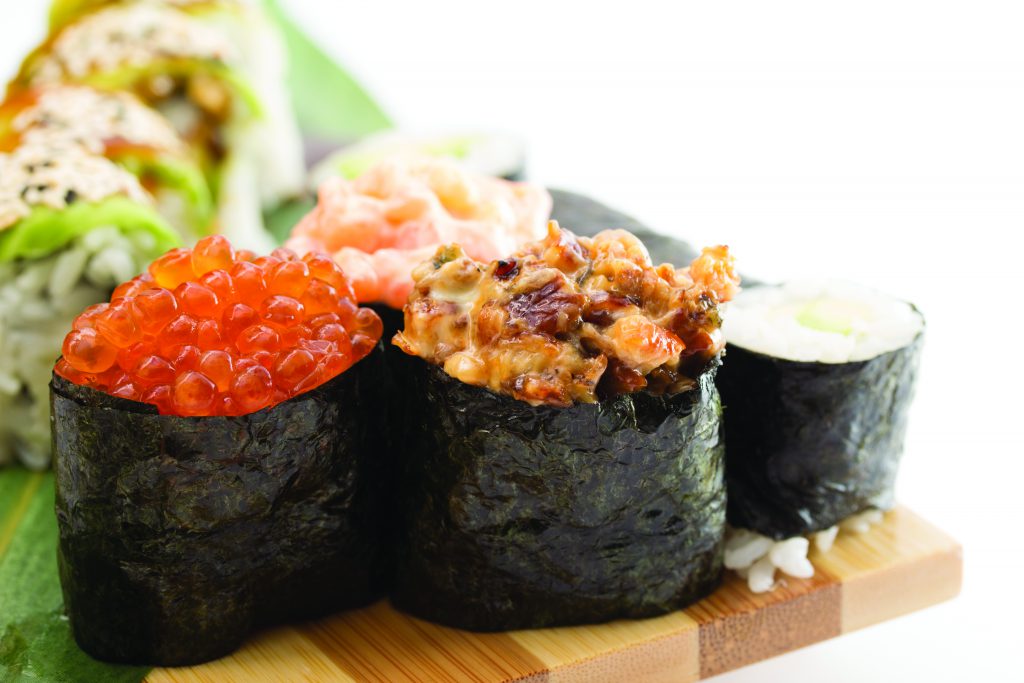 Interestingly, Clipper and Shunraku are started by the same company which has a strong heritage of cooking and serving meals to the local people of Tomakomai. Almost 60 years ago, the founders used to cook and deliver bento meals and ramen nightly to workers of the Daishowa Paper factory in Shiraoi area in Tomakomai city. Some years later they had ventured into making o-sushi and this gradually developed into full scale o-sushi restaurants in the 1990s.

Tomakomai locals are so accustomed to their high grade o-sushi that even local shopping mall sushi eateries tend not to compromise on the taste and freshness of their products. In Tomakomai’s Aeon Mall, the Heiroku Kaiten Zushi restaurant also offers good quality o-sushi but the prices are a little lower, ranging from ¥130 to ¥390. A meal for 2 could cost only about ¥3,500-4,500 (RM128-165).

One of the reasons why Tomakomai o-sushi restaurants and stores have a constant supply of amazingly fresh seafood is probably because of the existence of the ‘Sea Station Plat Sea Port Market’. The accessibility to the fishing port located right next to it provide an abundance of fresh sea hauls daily. The sea port market is not dressed up to attract tourists because it is a functional place of trade and retail where local vendors and families would shop for seafood, meats, vegetables, fruits and other supplies from morning until late afternoon when the place closes each day.

A unique feature of this market is the long busy corridor filled with food shops and stalls especially offering fresh seafood cooked on the spot and o-sushi made with fresh seafood, unloaded just hours before from returning fishing vessels at the seaport right next to the market.

‘Sushi’ in Japanese actually does not really mean raw or fresh fish but refers to the vinegar seasoned rice which is traditionally topped with different fish, meats or vegetables. O-sushi chefs often explain that o-sushi is not really about the fish but about how well the rice is prepared. They reasoned that a sushi chef only cuts and slices the fish which is used in its own freshness. But the real test is in the way the rice is cooked, mixed with the right proportions of vinegar, salt and sugar, and maintained at the perfect temperature. This, they believe is the way to determine the skill level of a sushi chef.