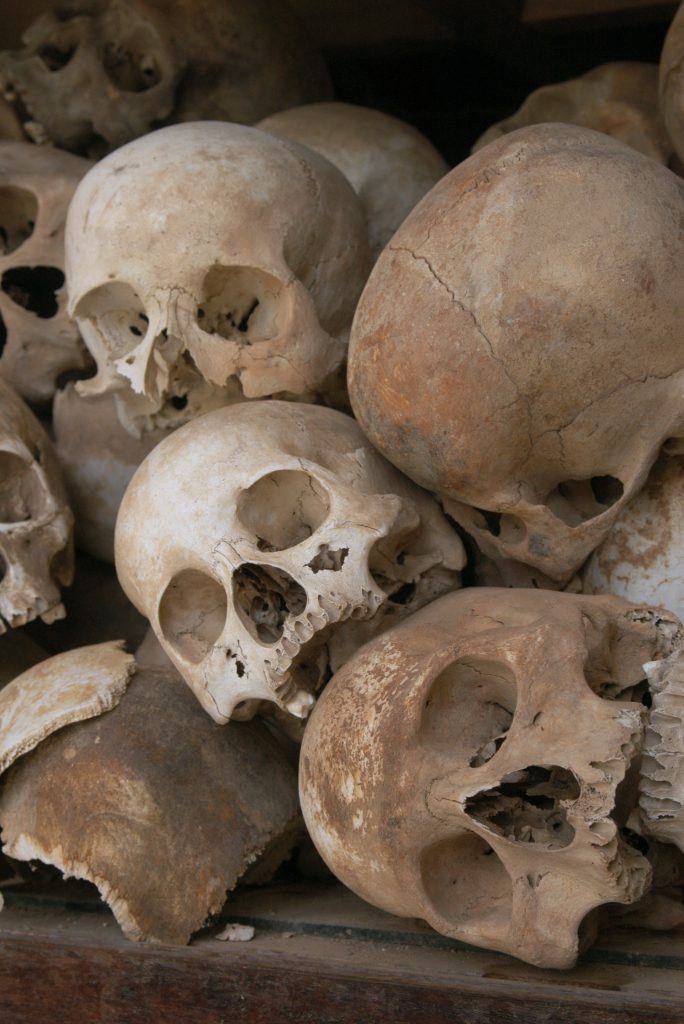 by theadmin
Skulls from a mass grave of Khmer Rouge victims in Choeung Ek. Photo from Adobe Stock The compelling draw of tragedy, destruction, and death blurs the line for tourism. Most quests to understand history has turned into terror travel–which introduces dark tourism.  How do I enjoy the rest of the holidays after my first visit... Read More

The compelling draw of tragedy, destruction, and death blurs the line for tourism. Most quests to understand history has turned into terror travel–which introduces dark tourism.

How do I enjoy the rest of the holidays after my first visit to a genocide detention camp? The chilling school-turned-prison camp for the Khmer Rouge is a popular place to visit in Phnom Penh. With a small admission fee, visitors to the Tuol Sleng Genocide Museum can walk around independently with individual audio guides.

The prison has turned into a memorial site to preserve the tragic times of the Khmer Rouge regime in Cambodia. The musty smell of its torture rooms, cramped prisons, and a roomful of victims’ headshots may already be overwhelming, but having the audio guide recounting the terror directly to the ears put multiple stops to my tracks. My energy was completely drained, and I was deeply conflicted. Little did I know, it was the start of dark tourism for me.

It is not a 21st century trend that death and tragedy appeal to travellers. Across the globe, public beheading is a crowd attraction in the past. Town folks of the early 18th century in England would wait out criminals to die in the gibbets hung in public crossroads. Visiting the morgue is a favourite pastime for Parisians to pore over dead bodies for free.

Today, to places related to violent mass killings and natural disaster sites is coined as dark tourism. As seen in the media, Netflix’s TV series “Dark Tourist” invites curious watchers to follow their travels to places with a dark history.

Admittedly, I had limited knowledge of Cambodia’s history before my visit. Walking on the grounds of Choeung Ek–a mass grave and killing fields over one million people in the Khmer Rouge–gave me more than just insight the history and the political regime of Cambodia, the harsh reality helped me to understand the bleak period of humanity in the country. It was sympathetically terrible to see thousands of victims’ skulls displayed in the glass stupa, arranged to precision.

Despite that, my inquisitiveness brought me to the War Remnants Museum in Ho Chi Minh City where there are photographic entries of the horrific war crimes during the Vietnam War. The blatant gore of some captured moments brings tears to the eyes. And I can’t help but admire the courage of generational victims of Agent Orange.

Man-made crimes are not the only kind of dark tourism. The remnant of a violent volcano eruption in 2010 is turned into a tourist attraction for visitors to see the dilapidated houses near Mount Merapi in Yogyakarta, Indonesia. Nearby, Bunker Kaliadem is a more popular stop for tourists to take scenic pictures with the volcanic mountain in the background. The bunker failed to prevent hot magma steam from seeping through and has ended the lives of people trapped inside; visitors can enter to take a look.

Malaysia has its share of dark tourism too. Tsunami Gallery in Kota Kuala Muda in Kedah showcases houses destroyed by the 2004 Indian tsunami and pictures of the natural disaster. Outside, there’s a monument of stacked fishing boats in remembrance of the lives lost.

Visiting dark sites has its constructive endings to the nightmare it contains. It brings a better understanding and awareness of the dark past that teaches us a lesson. Visitors to these galleries and sites also contribute financially to the community involved.

Sometimes visitors can forget that the presence of an outsider may unintentionally cause affected people to relieve their grief. A place where so many people have met their deaths should deserve the right kind of visitor’s attitude. The ignorance of one American Youtuber in Japan is a warning for technology-driven society to adhere–filming a hanging man in the Aokigahara forest for gag and profits is among the examples of exploitation of tragedy.

On a deeper level, we may also not be aware if corporations are selfishly profiting from tragedies-made tourism. Is the money collected channeled back to the victims or used to restore the sites? Some answers may be obscure. So before visiting these grave places, prepare yourself to travel with a conscience.

If anyone asks, did I regret any of my trips there? Absolutely not.